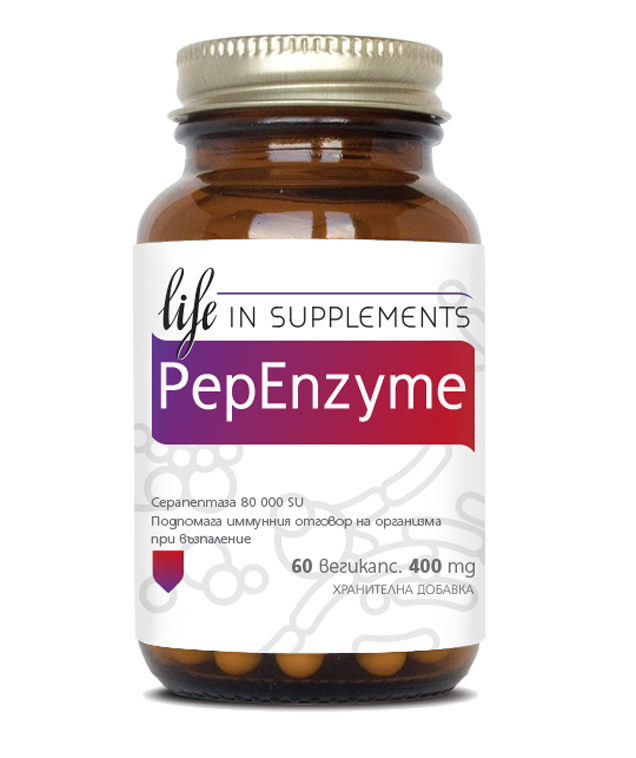 Serapeptase PerEnzyme is a powerful affecting the whole body enzyme that helps the body to build up an adequate response to emerging infections and those affecting the respiratory and sinus cavities.

Serapeptase 80000 SU / Units / is a powerful proteolytic enzyme obtained from species of bacteria originally found in the intestines of silkworms. Bacteria Serratia mercesans produce serapeptase - an enzyme that enables the silkworm to dissolve its silk cocoon and emerge after metamorphosis. At present, crops are grown from Serratia for serapeptase production by fermentation. Numerous studies and clinical studies have shown that there are anti-inflammatory, proteolytic (ability to break down protein) and fibrinolytic (ability to break down fibrin) properties. Studies also demonstrate that serapeptase helps to increase the health of the respiratory tract and sinus cavities, improves the healing of tissues, and significantly reduces the inflammation.

Serapeptase also has the unique ability to digest non-living tissue that is formed as a byproduct of the immune response of the body when inflammation occurs without damaging the living tissue. Fibrin is a hard / tough sort of protein arranged in long fibrous chains. It is formed from fibrinogen, a soluble protein, which is produced by the liver and is present in blood plasma. Fibrin tends to form circulating complexes that create barriers hindering the absorption of healing nutrients in and around the areas of inflammation.

PepEnzyme - the gastro-resistant serapeptase promotes normal fibrin metabolism,normal blood viscosity and blood flow. Additionally serapeptase maintains an adequate anti-inflammatory response of the body by reducing the metabolic inflammation, which usually occurs in the form of an asymptomatic inflammation process in response to stress, poor nutrition and other external factors. There is also some evidence / indications that serapeptase inhibits the C-reactive protein, a marker of inflammation, which is associated with cardiovascular disease.

PepEnzyme Systemic enzymes are the key to a healthy life. Processed foods, the impact of environmental toxins and diseases cause the body to use these enzymes, forcing him to work even harder to synthesize these enzymes and use them as a complex reaction of our organism against newly emerging infections at any time . Serapeptase maintains the systems of our body's bio-energetic charge of enzymes to help them work optimally, and to solve problems such as inflammation, presence of an excessive amount of mucus in the respiratory and sinus cavities and accumulation of fibrin.

Many people reach for NSAIDs (nonsteroidal anti-inflammatory drugs) such as aspirin, ibuprofen and naproxen for pain and inflammation management. They are effective, but come with serious side effects such as stomach bleeding, cartilage injuries, impaired metabolism, increased blood sugar, bone loss and emotional disorders. In July 1998, The American Journal of Medicine, said the following about NSAIDs / Non-steroid Anti-inflammatory drugs/ and the related to their use gastrointestinal and metabolic complications: "

According to conservative estimates approximately 107 000 patients were hospitalized for complications related to the gastrointestinal tract due to the use of NSAIDs, and at least 16,500 are deaths annually in patients with arthritic diseases associated with NSAIDs. The data for all the NSAID users are enormous, but nevertheless, the scope of this problem usually remains undervalued. " A completely natural enzyme system - serapeptase is a biocatalyst that stimulates and modulates the body's own inherent ability to recover from injury / damage without almost no side effects.