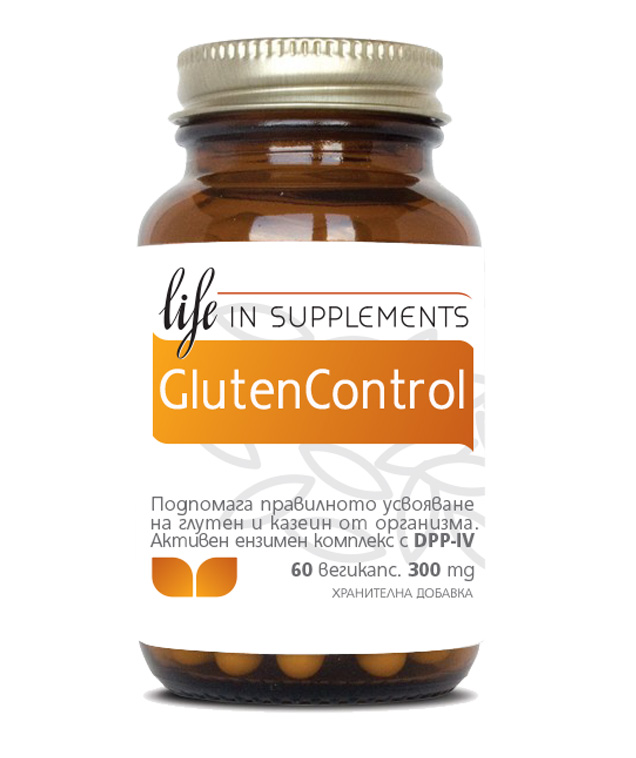 Gluten Control is a formula specifically designed to facilitate the digestion of gluten, casein and other proteins that cause allergies and food intolerances.

Gluten Control contains DPP-IV (dipeptidyl peptidase IV). This is an enzyme complex that breaks down gluten and casein. Gluten Control formula includes five more additional proteases, each of which has a specific digestive activity, complementing DPP-IV for the complete reduction of the protein. Significantly facilitates digestion by contained in Gluten Control amylase, lactase and lipase.

Gluten Control is a highly effective product that improves the overall protein assimilation.

The undigested proteins can enter the bloodstream in people suffering from Leaky gut Syndrome. Studies suggest that intestinal permeability is very serious problem that may lead to the development of various autoimmune problems.

Gluten Control contains the full range of proteases, facilitating the use of proteins. This is important because these proteins cause problems of the gastrointestinal tract, and hence - of the whole organism. DPP-IV (dipeptidyl peptidase IV) and five proteases added in Gluten Control contribute to the degradation of gluten and indigested proteins.

Gluten and casein are proteins that are large, complex molecules with thousands of amino acids sequentially rolled up in the molecule. Without enough specific enzymes to destroy them, the amino acid bonds in these large proteins may remain indigested. This leads to the formation of a protein, which is only partially digested. These smaller peptide bonds are long enough to cause digestive problems. Such problems are gas, bloating, occasional liquid stools, constipation, fatigue and sometimes severe gastrointestinal inflammation.

Improper digestion of carbohydrates is often caused by condition called gluten intolerance. Gluten Control deals with this problem by using two types of amylase, cellulase and glucoamylase that help complete digestion of sugars and carbohydrates.

Although avoiding foods that contain gluten is the best that can be done to relieve condition of these patients, it is not always easily accomplished. Even when people suffering from gluten intolerance maintain a strict gluten-free and casein-free diet, many products can be hidden sources of these proteins and cause serious problems.

Gluten Control is an effective addition to a gluten-free and casein-free diet, it relieves stress conditions caused by hidden gluten and casein, allowing these proteins to be properly digested and absorbed.