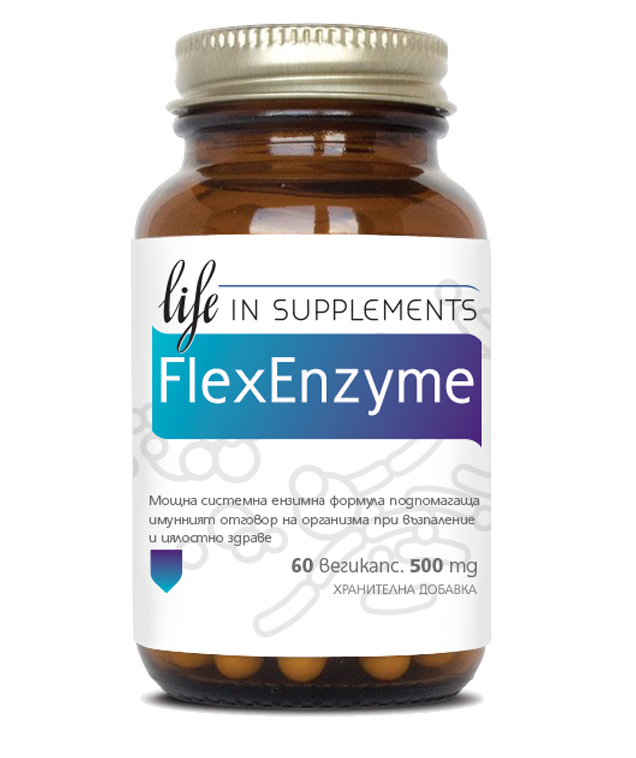 Removal of potentially toxic substances from the body is an essential part of the metabolic processes in the body for achieving optimal health. Various health problems can develop if it lacks the necessary supply of enzymes or if toxins in the body impair the function of enzymes or their availability. For example, the immune system may be overloaded by combating various bacteria, fungi, toxins, and even particles of food that are not broken down completely in the gastro-intestinal tract. In many cases, the body recognizes the proteins as foreign invaders and responds to them with an immune response. Recognizing them as antigens, the immune system responds by producing antibodies to begin the process of their degradation and removal. After binding with one another, these antigens and antibodies form circulating immune complexes (CIC). Then macrophages of the immune system (cells specifically designed to destroy CIC) in turn induce an attack to destroy the CIC. In cases where the inflammatory process is prolonged or when the CIC dominate within tissues and organs, the body may not have enough potential of enzymes to start the next process of rejuvenation and recovery. Furthermore, studies have shown that the lack of proteolytic enzymes can result in an inadequate greater accumulation of CIC in the body.

To solve this problem FlexEnzyme, offers a combination of a sufficient amount of various protease enzymes to facilitate the work of immune defenses and the dismantling of free circulating (CEC) complexes, which can keep your body in a constant state of inflammation.

FlexEnzyme also contains papain and bromelain, two enzymes known for their potent systemic properties. Gastroresistant serapeptase completes this potent mix of proteolytic enzymes with scientifically proven fibrinolytic effect. In the formula are also included amylase and lipase, which contribute with their enzymatic activity, for creating an additional catalytic power, which is essential for the complete decomposition of fats, sugars, and protein complexes.

For additional synergy FlexEnzyme is complemented by an anti-oxidant complex in the form of rutin and amla – herbs well known for their unique bioflavonoid content especially useful for rejuvenation and tissue repair. Systematic enzyme therapy for men and women For nearly 40 years serapeptases were in the focus of systemic enzyme therapy. System enzymes as serapeptase were used for the optimal functioning of the metabolism, cells, tissues and organs. To the initially invented formula of FlexEnzyme for their overall needs of enzyme therapy have resorted companies and health care professionals and also ordinary users. The reality is that inflammation can affect everyone - men and women. Moreover, along with almost all other tissues and organs, inflammation can have a significant influence on reproductive such / tissues and organs /. For example, many women experience painful swelling of the breast and uterine fibroids. In men, prostate health is a major concern. Although inflammation in each case can manifest differently in men and in women, the inflammation has a common source: fibrin.

Fibrin is a major protein that is produced during inflammation. Fibrin is a protein which is produced in blood clotting and the body uses it to prevent loss of blood, and for stopping the spread of infection following an injury. Production of fibrin is the first step that the body takes to counteract the occurring inflammation and subsequently to get recovered. But when an inflammation is prolonged the fibrin, together with other proteins such as collagen can begin to transform the tissue into a very tough fibrous matrix. Distinct and sometimes separated from the healthy tissue, these fibrous matrices carry the biological markers of inflammation. Study of systemic proteolytic enzymes over the years shows that the generated fibroids in women and the swollen prostate glands in men are signs that the body was not able to handle / to pass through the inflammatory process occurred. Formed as a result of that fibrous tissue would normally accumulate toxins that are not adequately removed from the body..

Enzymes are catalysts of energy that push the main chemical reactions in the body in the right direction. In his quest for inner balance, the body always turns to the enzymes. FlexEnzyme helps the body to deal properly with the inflamed tissue.

The superior proteolytic action of FlexEnzyme helps the body to remove the longer protein molecules generated in damaged cells and tissues, also due to the inflammatory response by itself. Apart from helping to break down these compounds FlexEnzyme helps to remove obstacles to the maintenance of healthy cells and the development of healthy tissues. Also helps to continue the process of their rejuvenation and restoration.

And why not some of your system enzyme therapy?

Used by silkworms to degrade their silk cocoon; studied extensively over the past 50 years; enzyme with an excellent fibrinolytic (protein degradation) and anti-inflammatory action.

Hydrolyzes (degrades) proteins such as casein, gelatin, soy, fish and other vegetable and animal proteins to smaller chain polypeptides (small proteins), and amino acids for easy absorption by the body

Collective name of proteolytic enzymes found in the pineapple plant (Ananas comosus); known for its anti-inflammatory and digestive properties. Good substitute for the animal enzymes such as pepsin and trypsin.

Obtained from the fruit of the tree papaya, papain, used for centuries as an effective means supporting digestion

A bioflavonoid - strengthens and tones veins and arteries, an antioxidant acting against free radicals and against inflammation.