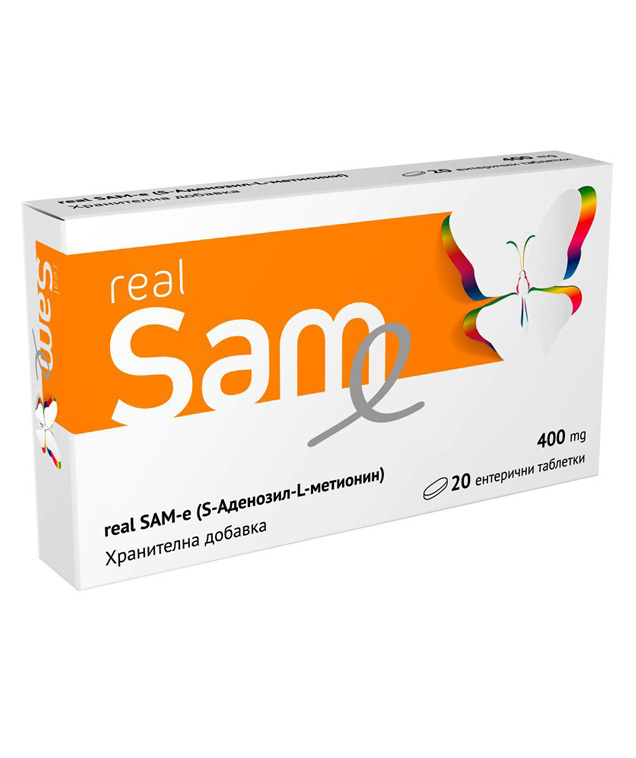 SAMe Real is a natural compound that is found in every cell of the human body and are vital to its function, stability and activity. It is one of the most active methyl donors produced in the human body as it is involved in more than 100 biochemical reactions and specific biological processes, including detoxification and brain function. The production process is called methylation and occurs and a billion times per second in every cell of the body. The methylation is responsible for many diverse processes - fetal development, brain function and the expression of genes, and further protects the cell membranes.

The main purpose of SAMe is to maintain normal liver function and overall balance. SAMe is involved in the synthesis of glutathione - one of the most important antioxidant in the regeneration of liver tissue, and thus protects the cells from the destructive action of free radicals. Various oxidation processes - inflammation and infections, environmental toxins and lifestyle, UV-rays, burns, surgery, increased intake of medicines, especially alcohol and drugs violate the glutathione levels in the body. SAMe levels can be reduced as a result of various diseases, as well as while aging.

SAMe has multiple mechanisms of action that actively help maintain the health of the liver. SAMe facilitates healthy enzymatic processes of methylation and boosts hepatic levels of glutathione. Favors natural detoxification processes. Serious injuries resulting from the action of free radicals occur when liver function is abnormal and glutathione is depleted.

SAMe assist the action of various hormones and neurotransmitters - serotonin, melatonin, adrenaline and dopamine. These important substances control sleep, mood and our social perceptions that are directly related to the emotional state and mental health.

Patients with bipolar disorder (manic-depressive illness) should not use SAMe Real except under medical supervision. Those who take antidepressants should consult their doctor before taking SAMe instead of or in addition to these drugs. These patients must be monitored by their doctor.

SAMe Real is not recommended for paediatric use.

SAMe Real can be used by pregnant women only with permission from a doctor and under medical supervision.

SAMe Real may reduce the effectiveness of the drug Levodopa for treatment of Parkinson's disease. SAMe Real can lower blood sugar levels and increase the effects of drugs for diabetes, which increases the risk of hypoglycemia.

Not a medicinal product. The product is a dietary supplement. Do not exceed the recommended daily dose. Do not use as a substitute for a varied diet. Store in cool dry place, inaccessible to small children.

If you need more information, please contact your doctor or pharmacist.